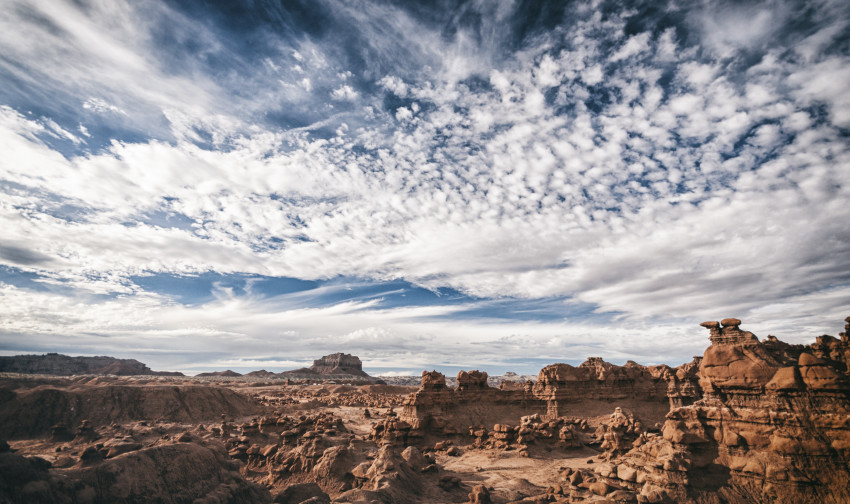 Driving on a road trip through the Wild West in Utah, you can’t help but find the amazing Goblin Valley State Park: a huge, reddish valley surrounded by sharp cliffs with a particular hype: the so called goblins, or mushroom shaped hoodoos!

The Goblin Valley State Park is located in Hanksville, Utah. What makes it special and instantly recognizable is the goblins that can be found all around its surface. But no, we are not referring to little, funny, naughty elves: “goblins” is the nickname given to the hoodoo formations of the valley. These rock formations present the shape of huge mushrooms that can be several meters high. Goblin Valley has one of the highest hoodoo densities in the world, resulting in a desert covered in stony mushrooms. The distinct shape of these particular rocks comes from the erosion resistant layer that lies above another softer sand layer, known as the Entrada sandstone. According to investigations, it was deposited in the valley in the Jurassic period, around 170 million years ago! 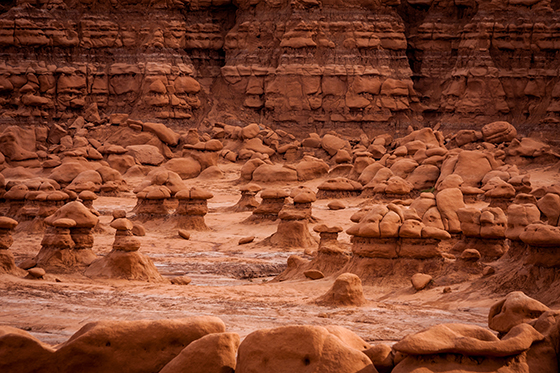 Cowboys that were on an expedition searching for cattle in the early 1900s originally found the Goblin Valley. Later, in 1920s the entrepreneur Arthur Chaffin, who would be later known by owning the company Hite Ferry, rediscovered the valley while searching for an alternative travel route between Green River and Caineville. He and his companions were amazed by what they found instead: a valley full of strange, goblin shaped rock formations surrounded by walls of eroded orange sand cliffs. Chaffin gave it the name of Mushroom Valley, but he wouldn’t return to it until the 1940s, when he started the exploration of the mysterious valley and the funny eroded rocks. Despite its remoteness, it immediately started attracting curious people. In 1954 it was proposed that Goblin Park would be publicly protected against vandalism, although it would not be designated as an official state park until 1964, after being acquired by the State of Utah.

Apart of the goblins, there is some vegetation in the valley despite the desert like nature of it. Mostly it is formed by hardy species that can endure blowing sand and hot dry conditions. Some examples that can be found in Goblin Valley are the Mormon Tea plant, Indian rice grass and various kinds of cactus. The difficult access to water resources makes survival possible for only a very small number of animal species, but still you can still find some of the most enduring ones that can go for weeks without drinking water, like desert rabbits, scorpions, rats, kit foxes, lizards and coyotes. 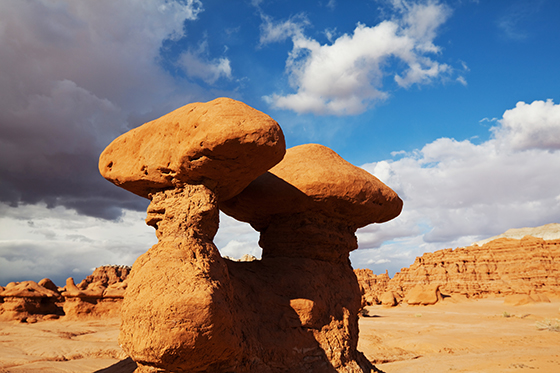 The original surface of the valley and its reddish, Mars-like look made it the perfect choice to act as the surface of an alien planet in the science fiction movie Galaxy Quest (1999, directed by Dean Parisot). Part of the movie was shot in the valley, where the crew of the Protector stops at a rock planet filled with strange looking rocks, and Captain Nesmith (Tim Allen) battles a monster made of rock that emerges from one of the goblins.

Today, intrepid visitors can engage in many interesting activities at the park. It is possible to camp in tents or to rent a yurt to spend the night in the nature, surrounded by the peaceful desert. For more the more adventurous, the park offers activities like mountain biking through the desert and cliffs, hiking to the top of the mountains where you can get amazing views of the goblins from above or play disc gold in the valley.

There are three trails that cross the valley, allowing people to drive across the desert and between the hoodoos: The Carmel Canyon in a strenuous loop that leads from the parking area to the desert floor; the Curtis Beach is a fairly easy trail that follows the Curtis formation and offers a unique overview of Goblin Valley as well as spectacular views of Henry Mountains; finally, the Entrada Canyon is a one way trail only recommended for the most adventurous visitors that goes from the campground to the goblins and back following a natural drainage. 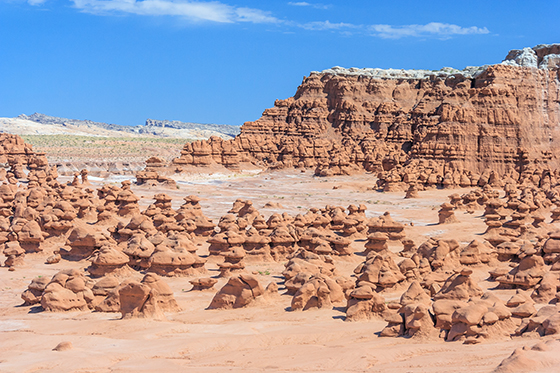 Even the night is full of adventure! You should definitely not miss the night skies of the Goblin State Park: according to the National Park Services Night Sky Team, the sky in this spot is one of the darkest night skies on earth! It is free of pollution and far from populated light areas. Therefore, it offers incredible views of the Milky Way. Many events are offered by the park rangers to enjoy this unique spectacle, including moonlight hikes and telescope tours.

Discover the amazing hoodoos of Goblin Valley State Park and many other great landmarks in the greatest road trip through the Wild West, which will take you through Arizona, Colorado, Utah, Nevada and California in an unforgettable adventure: the Wild West Challenge!

Liked this story? Getting itchy feet to travel and find adventures? Then join us on our next Wild West Challenge. Get a team together and experience an amazing road trip through the Wild West! If you want to join us in spirit, like us on Facebook or follow us on Twitter to keep up with our latest antics. And to never miss any important update, why don’t you sign up for The Travel Scientists Newsletter!
Tags:
adventure adventure drive adventure trails adventure travel camping Carmel Canyon Curtis Beach Entrada Canyon Galaxy Quest Geology Goblin Valley Goblin Valley State Park Hanksville Henry Mountains hiking Hoodoos Mushroom Valley National Park State Park trial Utah