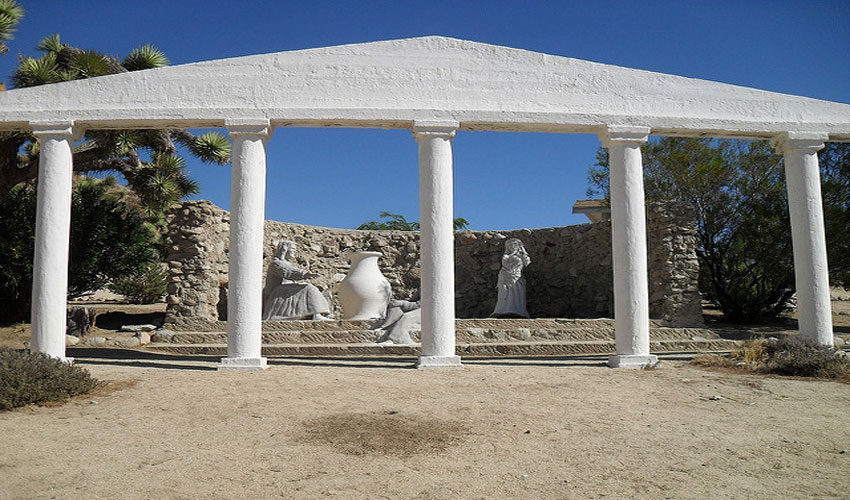 If you’ve seen our last piece on one man’s deeply private record of his relationship with divinity and the eternal, this is about as far as you could get from it in terms of purpose, style, and, well, state of repair. Yes: this, dear reader, is the goose bump-inducing spectre of lachrymose piety high on the spirit of world domination, made into stone, a.k.a. Desert Christ Park.

When and how did it happen?

This Christian theme park’s concept first coalesced in the mind of Reverend Eddie Garve, the then local pastor. The faith-based attraction was meant to serve as a symbol and light for world peace. And lo! His boat did come in (as it were), in 1950, as the US government granted the ‘ Pastor in the Desert’ five acres of south-facing land on a barren mount, overlooking the valley.

I bet he was excited. So when did it all get built?

The first biblical statue appeared here in 1951 in a frenzy of media attention. It just so happened that a year before, Frank Antone Martin, an artist, sculptor and poet from Inglewood, California, had been refused permission to perch his five-ton, ten-foot steel and plaster Christ statue on the edge of the Grand Canyon.

Hmm. Wonder what could have gone wrong there.

Yes. Cue Reverend Garver riding to the rescue: he offered the ‘rejected Christ’ a home on his windswept hillside, and despite numerous other offers, Martin opted for the Yucca Valley site and brought the statue to Garver on the back of a pickup truck. The giant, supine Jesus journeyed from Los Angeles via the Desert Highway and was unveiled on Easter Sunday. 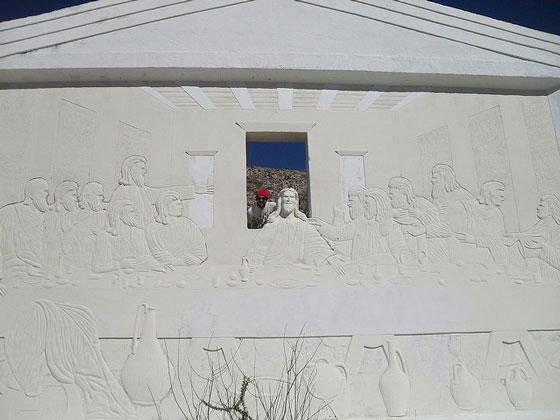 Nonstop inspiration apparently came gushing all through the next ten years, because Frank Antone Martin carried right on. By the time of his death in 1961 at age 74, he had created over 35 statues from steel, concrete and plaster, including a three-storey, 125-ton relief of The Last Supper. As a finishing touch, he installed a window behind Christ’s head, and built a platform where visitors could pose for a photo with the savior.

Just got myself a selfie stick. Would be handy There, I guess.

Well, yes and no. No if you’d like straight-up, fervent piety. Yes if you’re a freak show-with-a-touch-of-disaster-kitsch aficionado. Because ever since 1971, the park has been decaying due to neglect, and today it is Dawn-of-the-dead degree of disconcerting.

Oh dear. Such a shame. 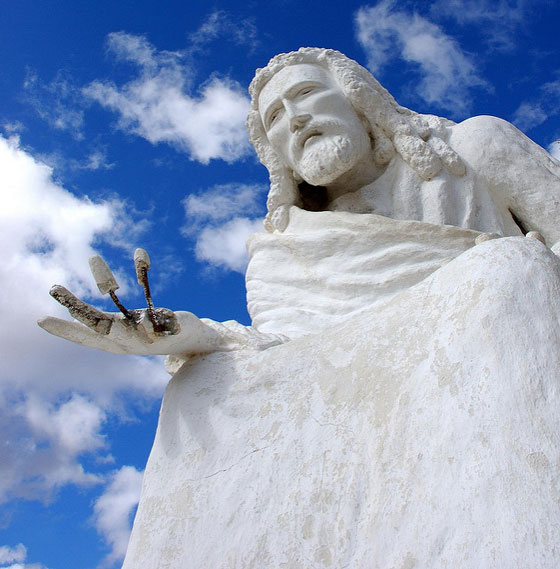 Indeed. Years of neglect were in 1992 joined by an earthquake in nearby Landers, which knocked off feet, hands, and heads, and exposed the statues steely skeletons. Thereafter, accelerated decay took over, most noticeably in the ‘Blessing of the Children’ scenes, where some of the children are missing faces and limbs.

So is it destined to go all ashes to ashes, dust to dust?

Not quite. Fortunately, the park has a large-ish fan base, who aren’t just praying for salvation; they have established the Desert Christ Foundation to resurrect the dilapidated disciples. They have faith that their efforts will lead to the parks’ salvation. As for us, well, we’re keeping our fingers crossed.

Liked this story? Getting itchy feet to travel and find adventures? Then join us on our next Wild West Challenge. Get a team together and experience an amazing road trip through the Wild West! If you want to join us in spirit, like us on Facebook or follow us on Twitter and Instagram to keep up with our latest antics. And to never miss any important update, why don’t you sign up for The Travel Scientists Newsletter!
Tags:
adventure California camping desert Desert Christ Foundation Desert Christ Park desert statues Frank Antone Martin joshua tree Joshua tree National Park Landers earthquake Reverend Eddie Garve statues in the desert Wild West Wild West Challenge yucca valley