The Mojave Phone Booth: a Desert Enigma That Lives On 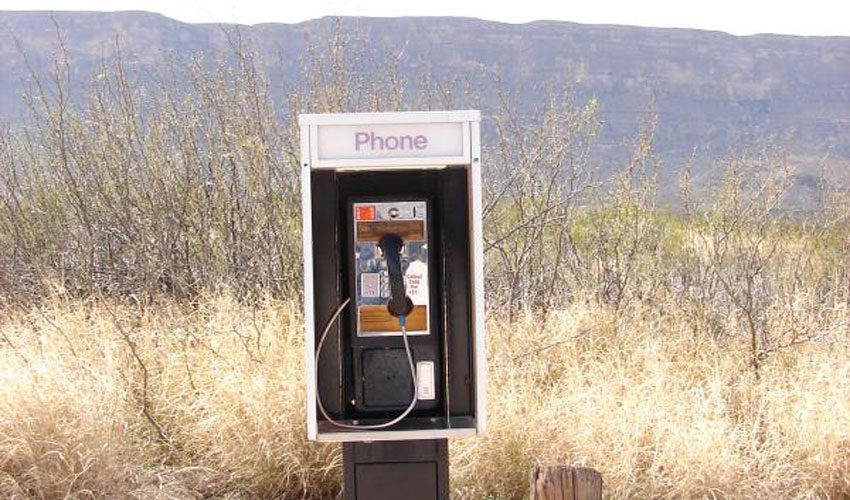 Joshua Tree National Park’s third manmade wonder, Mojave Phone Booth, is in a class of its own, for not only was it one of the first examples of viral fame found at the intersection of the virtual and real worlds, but also, in a way, of life after death.

Yes. The Mojave Phone Booth (all capitals because of its legend status) stood in the middle of the Mojave desert, miles from anywhere and magically answered your calls. A casual mention of it and its number was accidentally discovered by man by the name of Godfrey Daniels in a zine one evening, and the rest, as they say, is history.

What did he do with the information?

The idea that a phone serving an unknown clientele stood in the middle of Mojave’s barren moonscape, its ring echoing off into the void, transfixed him. So, he began to dial the phone with increasing frequency for over a month. Now that you have the image of a man assiduously calling the number of a phone box that might as well have been on the Moon, imagine his face when, one evening, he did get a reply. Or rather, a busy signal, the next best thing.

I bet he was pleased.

He went into a full frenzy until the busy signal gave way to a ring, and the call was answered on the other end by a woman. She turned out to be a cinder miner by the name of Lorene who lived off the grid and relied on the phone as her sole means of connecting with the civilized world. Far from ruining the mystery, Lorene’s existence fuelled  Daniels’curiosity even more, because he now  knew the phone was real. And now nothing could stop him from visiting it.

And when he got there, he realized he had no change.

Very funny. He found the Mojave Phone Booth between Vegas and Baker by the turn off for Cima, skirted by Joshua trees deep in the Mojave National Preserve. It was exactly as he had pictured it in his mind’s eye.  And then, surrounded with the desert’s endless sandscape expanding in every direction, he took the phone off the hook and made a call from it, to a friend.

Good. So when he returned home, Daniels  built a website dedicated to the Mojave Phone Booth. He  published its number (760-733-9969), so all the world could hear of his finding. In 1997, this was the best thing the Net had ever seen. Suddenly, people were making pilgrimages to the phone booth in the middle of nowhere, and the line became permanently engaged. Visitors took turns answering calls from the farthest corners of the world, having conversations with strangers whenever language barriers allowed.

So there was a queue for a phone in the middle of the desert.

Correct. Unfortunately, it was the phone’s sudden popularity that became its undoing. Up to then, its existence in the middle of the Mojave National Preserve had been a non-issue for the National Park Service. But the surge in traffic – one of the earliest instances of a real-world location going viral because of to the net – had become a problem.

They took it away?

They did. One day, in May of 2000, the phone booth was there. The next, it had vanished, leaving only a concrete slab as a makeshift grave where that enigmatic portal between the digital and real worlds had once been. But here comes the bit no-one was expecting.

Someone put another booth in its place?

Try again. So not long ago, a phreak and hacker and by the name of Jered Morgan decided to resurrect the spirit of the Mojave Phone Booth. Now anyone can call the disembodied phone at its original number, where they will then enter a conference call.  A lot like calling the desert, someone might be waiting on the other end, or they could find only themselves echoing in a vast (digital) void.

And the site in the desert?

Yes, back in the real world, the booth itself remains gone, and even the concrete pads where it had once stood have been removed. Nevertheless, it seems that a pilgrimage to the site of the former Mojave Phone Booth at the coordinates provided is still honourable, given its past virality and continuing, disembodied presence out in the ether. You might join the ‘bootsters and pay a visit yourself if/when you come with us on a Wild West Challenge. Alternatively, you could visit its tribute website or call it right now and see who answers.

Liked this story? Getting itchy feet to travel and find adventures? Then join us on our next Wild West Challenge. Get a team together and experience an amazing road trip through the Wild West! If you want to join us in spirit, like us on Facebook or follow us on Twitter and Instagram to keep up with our latest antics. And to never miss any important update, why don’t you sign up for The Travel Scientists Newsletter!
Tags:
adventure California desert joshua tree Joshua tree National Park Mojave desert Mojave Phone Booth Wild West Wild West Challenge