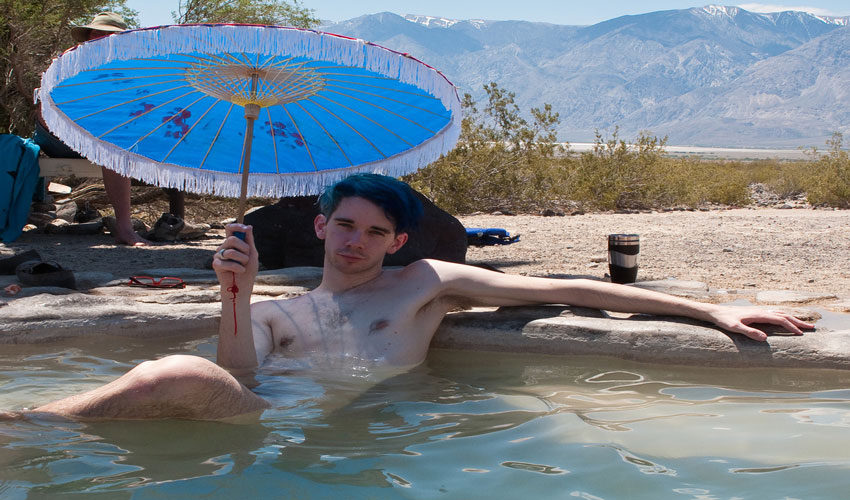 In case you thought they may sound too good to be true, these hot springs really are what they say on the tin: a hard-to-find oasis in a desolate corner of Death Valley National Park. The three springs are surrounded by palm trees in the middle of the arid Saline Valley famous for its borax, salt, and abandoned mines, and create a magical, clothing-optional oasis for the hardier souls who relish the pastime of hard desert camping and off-road rallies – the kind of people you might have met in passing, perhaps.

Sooo yea. Saline Valley is an assortment of gorgeous springs, each with multiple (soaking) wallowing pools arranged in a line along a stretch of dirt road about 3 miles long. They make a satisfying reward after a bumpy, sweat-soaked journey, I hear.

Will I, errr, they find anyone there when they go?

There’s a fat chance, yes. It’s been occupied almost full time ever since the 60s, when a bunch of free thinkers, nudists, nomads, (or freethinking nomads, nomadic nudists, etc., etc.) set up a semi-permanent camp here. They gradually tamed the wild hot springs into a row of soaking pools made of rock, concrete, and tile, built dishwashing facilities and showers, planted grassy areas, and dug three latrines — and so created a vacation spot to escape to from the unforgiving Death Valley climate.

Wow. But how did they sustain themselves?

They relied completely on supplies from the closest towns of Big Pine and Lone Pine. Timing was crucial, because they were often cut off from these towns by storms that made the the dirt roads impassable. Not all were willing to live that close to the edge, so their population waned during the sweltering heat of summer and the brutal freeze of winter.

Interesting. Were they largely left alone by the authorities?

Not exactly. There were quite a few attempts to clear out the encampment, none of them by force and none of them successful until 94’. In that year, Saline Valley and its warm springs were annexed by Death Valley National Park. The camp was dispersed, and visitation was limited to thirty days. The latrines were replaced by a notch less crude system of concrete lines, and the area was put under the supervision of the National Park Service.

I kinda have mixed feelings about this. So did everyone leave?

Almost everyone. All the wanderers were eventually displaced, but one man, by the name of Wizard, stayed. Wizard was the longest and most consistent resident of the camp, and so was made the permanent caretaker for it until he passed away and Lee Greenwell took over his post.

Is he there still?

He is.Although today the springs are not marked on any maps, and rangers at the station in Big Pine aren’t exactly forthcoming in giving visitors directions to them, the camp is lively with adventurers: they help Lizard maintain the grounds between soaks, hike in the surrounding hills, go on 4×4 adventures, and enjoy soccer games in the camp.

Sounds like just the thing for a friend I know.

Yea, but there is also quite a different vibe nearby, because the airspace above the camp belongs to the US military’s R-2508 Special Use Airspace complex, so low-flying jets are not uncommon here either. Rumour has it that if campers fly an American flag from their home, the jets will give them a little thrill with an extra low buzz overhead. There is a landing strip of sorts near the springs, and various small aircraft can be enjoyed as touch down and they lift off.

Great! What more could anyone want?

Well, as my grandpa used to say, this is the kind of thing for people who like this kind of thing. But for everyone else, like the blithely ill-prepared, or prissy creature comfort-appreciators, it’s a no-no. The road is brutal on vehicles, treacherous, and is often washed out in multiple patches. The climate varies from day to day and even hour to hour with wild temperature shifts in both directions and strong winds, and the journey to the hot springs involves a sharp altitude drop. So do your homework before visiting here, and be self-sufficient — this is an adventure for prepared and seasoned adventurers who like things, like, say, the Wild West Challenge.

Liked this story? Getting itchy feet to travel and find adventures? Then join us on our next Wild West Challenge. Get a team together and experience an amazing road trip through the Wild West! If you want to join us in spirit, like us on Facebook or follow us on Twitter and Instagram to keep up with our latest antics. And to never miss any important update, why don’t you sign up for The Travel Scientists Newsletter!
Tags:
adventure California Death Valley death valley hot springs death valley oasis desert hot springs Joshua tree National Park saline valley saline valley hot springs Wild West Wild West Challenge